Just amazing. You no longer have to wonder what Scott Walker thinks about immigrants, or says about them around his office and private meetings. His aide spilled the beans. 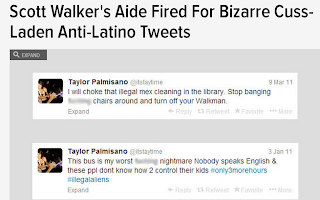 This is what the administration's position is, based on racism and fear mongering. Maybe reporters should ask Walker why the people around him are saying such racist things. Keep in mind, these comments were made back in 2011. Her recent press release asking parent to forego their kids Christmas gifts for campaign donations was the real reason she was fired. This was Walker damage control, where he didn't want to have any part of what could and still might be...a GOP "war on Christmas." Forget about the two year old racism. Gawker:


Wisconsin Gov. Scott Walker (R), who's trying to generate buzz for a possible 2016 presidential run, had to fire a campaign aide today for her past racist Twitter rants against Latinos—the second such incident to rock Walker's administration since last summer.

The Milwaukee Journal-Sentinel reports that Taylor Palmisano, Walker's deputy campaign finance director, was let go Tuesday after activists pointed out her old grumpy "fuck"-filled tweets about "illegal" people who were bothering her on the bus and in the library....

This was the second such firing since August, when another Walker aide—Steven Krieser, assistant deputy secretary of the Wisconsin department of transportation—lost his job after writing on Facebook that illegal immigrants were the spawn of Satan:


[W]e get to be treated to the incredible chutzpah of hundreds of thousands of these criminals marching in the streets in broad daylight, demanding all the benefits of citizenship from a country whose laws they are breaking even as they are standing there. The illegals themselves have bred the animus that many American citizens feel toward them You may see Jesus when you look at them. I see Satan.