WPR reported this about job growth, and provided a nice looking graph:

Louis Johnston is an Associate Professor of Economics at the College of St. Benedict 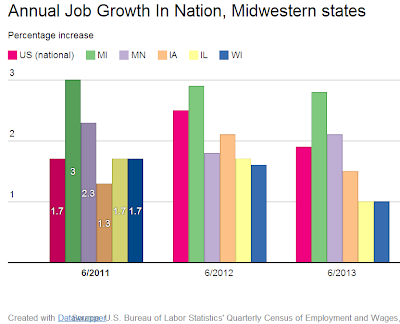 and St. John's University in Minnesota. He says these numbers represent a long-term trend for Wisconsin.

“And the impression I get is that in 2010, the idea was that policy changes that Governor Walker proposed would change that trend,” says Johnston. “And from what I can see it hasn't had any effect at all. Wisconsin continues to lag the nation in terms of both job growth and income growth. And if anything, things have perhaps gotten a little worse.”