Can you imagine how our nation of good Christian conservatives will react to the continuing exploits of the “liberal” Pope? 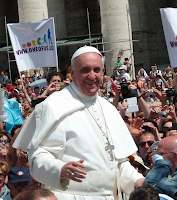 Think Progress: The leader of the Catholic Church has been quietly sneaking out of the Vatican at night to minister to homeless residents, according to a new report. “Swiss guards confirmed that the pope has ventured out at night, dressed as a regular priest, to meet with homeless men and women,” writes The Huffington Post.

Just months after assuming the papacy, he invited nearly 200 homeless people to join him for dinner at the Vatican. He also deplored the plight of homeless people in the first apostolic exhortation of his papacy last week: “How can it be that it is not a news item when an elderly homeless person dies of exposure, but it is news when the stock market loses two points?”

Over the years, the Catholic Church has grown too “obsessed” with abortion, contraception, and gay marriage, Pope Francis argued in May, imploring followers instead to focus on combating trickle-down economics and the world of inequality it produces.

Pope Francis … shedding gold-embroidered robes and an ornate golden throne for white threads and a wooden chair. These pronouncements and actions have earned him the nickname “Pope of the Poor.”

I've included a more complete version Pope Francis' recent statement below, as proof religious conservatives like Paul Ryan are phonies. A note to reporters, ask the GOP where they stand on the Pope's positions:


Here's what the pope has to say about conservative economic policies, after first arguing that society now treats human beings as part of a "disposable culture," discarding people at the will of the "haves".

"The excluded are still waiting: In this context, some people continue to defend trickle-down theories which assume that economic growth, encouraged by a free market, will inevitably succeed in bringing about greater justice and inclusiveness in the world. This opinion, which has never been confirmed by the facts, expresses a crude and naïve trust in the goodness of those wielding economic power and in the sacralized workings of the prevailing economic system. Meanwhile, the excluded are still waiting.

To sustain a lifestyle which excludes others, or to sustain enthusiasm for that selfish ideal, a globalization of indifference has developed. Almost without being aware of it, we end up being incapable of feeling compassion at the outcry of the poor, weeping for other people’s pain, and feeling a need to help them, as though all this were someone else’s responsibility and not our own. The culture of prosperity deadens us; we are thrilled if the market offers us something new to purchase; and in the meantime all those lives stunted for lack of opportunity seem a mere spectacle; they fail to move us.

While the earnings of a minority are growing exponentially, so too is the gap separating the majority from the prosperity enjoyed by those happy few. This imbalance is the result of ideologies which defend the absolute autonomy of the marketplace and financial speculation. Consequently, they reject the right of states, charged with vigilance for the common good, to exercise any form of control. A new tyranny is thus born, invisible and often virtual, which unilaterally and relentlessly imposes its own laws and rules. Debt and the accumulation of interest also make it difficult for countries to realize the potential of their own economies and keep citizens from enjoying their real purchasing power. To all this we can add widespread corruption and self-serving tax evasion, which have taken on worldwide dimensions. The thirst for power and possessions knows no limits. In this system, which tends to devour everything which stands in the way of increased profits, whatever is fragile, like the environment, is defenseless before the interests of a deified market, which become the only rule.

Today’s economic mechanisms promote inordinate consumption, yet it is evident that unbridled consumerism combined with inequality proves doubly damaging to the social fabric. Inequality eventually engenders a violence which recourse to arms cannot and never will be able to resolve. This serves only to offer false hopes to those clamouring for heightened security, even though nowadays we know that weapons and violence, rather than providing solutions, create new and more serious conflicts. Some simply content themselves with blaming the poor and the poorer countries themselves for their troubles; indulging in unwarranted generalizations, they claim that the solution is an “education” that would tranquilize them, making them tame and harmless. All this becomes even more exasperating for the marginalized in the light of the widespread and deeply rooted corruption found in many countries – in their governments, businesses and institutions – whatever the political ideology of their leaders."

Much farther into the document, the Pope discusses the poor in far more detail with a pointed edge that calls not just for individuals to fight for social justice, but entire governments.

"As long as the problems of the poor are not radically resolved by rejecting the absolute autonomy of markets and financial speculation and by attacking the structural causes of inequality, no solution will be found for any of the world's problems or, for that matter, to any problems. Inequality is the root of social ills.

Politics, rhetoric and priorities: "The dignity of each human person and the pursuit of the common good are concerns which ought to shape all economic policies. At times, however, they seem to be a mere addendum imported from without in order to fill out a political discourse lacking in perspectives or plans for true and integral development. How many words prove irksome to this system! It is irksome when the question of ethics is raised, when global solidarity is invoked, when the distribution of goods is mentioned, when reference is made to protecting labour and defending the dignity of the powerless, when allusion is made to a god who demands a commitment to justice. At other times these issues are exploited by a rhetoric which cheapens them. Casual indifference in the face of such questions empties our lives and our words of all meaning."

His prayer for politicians: "I ask God to give us more politicians capable of sincere and effective dialogue aimed at healing the deepest roots – and not simply the appearances – of the evils in our world! Politics, though often denigrated, remains a lofty vocation and one of the highest forms of charity, inasmuch as it seeks the common good.
I beg the Lord to grant us more politicians who are genuinely disturbed by the state of society, the people, the lives of the poor! It is vital that government leaders and financial leaders take heed and broaden their horizons, working to ensure that all citizens have dignified work, education and healthcare. Why not turn to God and ask him to inspire their plans? I am firmly convinced that openness to the transcendent can bring about a new political and economic mindset which would help to break down the wall of separation between the economy and the common good of society."