Businesses get to influence government privately, while citizens have to expose themselves at public meetings with their tax reform suggestions. How tone deaf do you have to be to not have a problem with that? 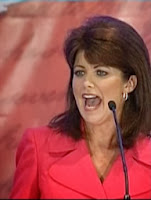 How special: According to Scott Walker and Lt. Gov. Rebecca Kleefisch, the common folk in Wisconsin will soon get a chance to give their input on tax reform out in the open, where reporters can document every word.

But the Walker Authority meetings set up with business leaders? That’s a private affair, so these truly “hardworking taxpayers” (that’s how Walker described them), can “speak freely without worrying about what they have to say.” Offended yet?

Make special note of the Walker Authority’s not so subtle suggestions that we shouldn't be alarmed, it’s just “standard procedure,” and it will “continue” to be like this. Oh really? Post Crescent:

The first in a series of round table discussions touted by Gov. Scott Walker as a way to gather information about possible tax reforms from “hardworking taxpayers” was closed to the public until it was nearly over, a move described as standard procedure that will continue. Walker, in a Tuesday press release, touted the Beloit round table the meetings are an “outstanding opportunity for the hardworking taxpayers to voice their opinions and offer suggestions on Wisconsin’s tax climate.”

But the Beloit event, as well as two similar ones scheduled for next week in Superior and Eau Claire, are by invite only and will not be open to the general public, said Kleefisch’s chief of staff, Casey Himebauch. “The majority of the event is closed to the press to allow the participants to speak freely without worrying about what they have to say. This is just standard operating procedure. Future roundtables will follow the same format. The public will have a chance for input later, Himebauch said.

My god how condescending does an administration have to be before the public gets pissed off?

Scot Ross, leader of the advocacy group One Wisconsin Now … filed an open records request to obtain a copy of video shot of the meeting by a member of Kleefisch’s staff. The Beloit Daily News reported that Kleefisch said the video would not be made public because it was recorded for internal purposes.


“Lt. Gov. Kleefisch videotaped a meeting at which she acted in her official capacity and, along with another member of Gov. Walker’s cabinet, discussed state policy that affects every single Wisconsin resident,” Ross said. “She … ought to be ashamed of her efforts to hide the open record of the event from the public.”