Scott Walker says Government has no place meddling in racism, which to him is a free speech issue. Racist Mascots...Punt!!!

Mr. Unintimidated has decided to “punt” when it comes to doing away with racist mascots.

If it were up to Walker, local governments in the 60’s would have had to deal with racist policies, because racism is all about free speech. Who’s to say “where do you draw the line” when it comes to racism.

Walker’s real colors are showing, whether he appreciates the spot the legislature just put him in or not. We're finally seeing the weak career politician we knew was lurking underneath that empty unemotional gaze: 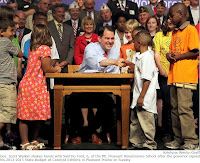 jsonline: Gov. Scott Walker said Tuesday that school districts should drop Indian team names and mascots on their own and questioned whether the state should force them to do so, signaling that he will sign a bill this week making it harder for state officials to end the practice.

Walker is full of advice and supposed good intentions, but it’s a smoke screen for a much more radically mean spirited tea party agenda, and it stinks with racism.

…he said he would prefer to see schools do that voluntarily. He said he empathized with those who are offended by Indian team names, but cast the ability of schools to choose their team names as a First Amendment right.

Mascots objects and logos. But an even better, more legal point of view was offered up at Uppity Wisconsin:

This opinion was forwarded by the ACLU today:

Why would a public school district want to harm some of its students? Free speech is no justification.”