Are the Democrats crazy? What the hell did they just do? My god….

WaPo: That was fast. Just four days after its introduction, a bill to cut $100 million in Wisconsin property taxes is on its way to becoming law. The Senate passed the bill 28 to 5 on Tuesday, while the Assembly passed it 82 to 12 on Thursday.

Democratic Sen. Tim Cullen criticized the package … “What we’re doing is trying to help a governor get elected,” Cullen said.

Ya think? Democrats even had cover voting no when they offered a well thought out amendment: 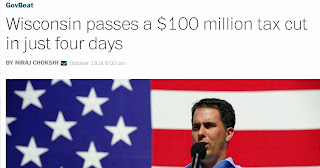 Democrats proposed an amendment that would have resulted in a real property tax cut for middle class families, but it was defeated.

The $725 million deficit going forward is not “insurmountable,” Jon Peacock, the director of the policy think tank the Wisconsin Budget Project wrote this week in a critical post about the cut. But it would be better spent on offsetting bonds the state has issued in recent years or increasing the state’s minimum budget balance, he said.

Here’s the Walker talking point for his reelection and presidential run:

Like it or not, though, Wisconsin did something that feels increasingly rare at the federal level: (Rep. Robin Vos said) It’s “getting things done. While Washington is mired in dysfunction and debt, overspending and over-promising, Wisconsin is going in a different direction.”

Is there a competitive bone in the Democratic Party? This was the headline in the conservative Wisconsin State Journal:


Little to no tax relief expected for property owners in 82 school districts.