Walker gave up his "divide and conquer" guilt over Act 10...to God.

The purity and "righteousness" of the conservative belief system has never been more abundantly clear than in a statement made by Scott Walker in his book "Unintimidated." 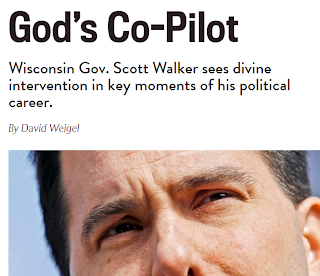 God got Scott Walker out of a serious jam. It was February 2011, Ian Murphy, the editor of the Buffalo Beast, called Walker’s office pretending to be donor/industrialist David Koch … goaded Walker into talking about his strategy for passing Act 10 … “Bring a baseball bat,” said Murphy/Koch. “I have one in my office,” said Walker, “a Slugger with my name on it.”

…when Murphy/Koch asked about the wisdom of “planting some troublemakers,” Walker said his team had “thought about that” but dismissed it.

Here’s where God sent his message directly to Walker, turning his bad divisive arrogance into a more subtle nudge from our Lord:

“Only later did I realize that God had a plan for me with that episode,” writes Walker. After his press conference, he picked up his daily devotional and saw the title for Feb. 23: The power of humility, the burden of pride. “I looked up and said, ‘I hear you, Lord,’” writes Walker. “God was sending me a clear message to not do things for personal glory or fame. It was a turning point that helped me in future challenges, helped me stay focused on the people I was elected to serve, and reminded me of God’s abundant grace and the paramount need to stay humble.”

It's kind of like hearing voices in your head to justify your actions, isn't it?

Don't get me wrong, I still think Walker is a sociopath. But just for the sake of this story, let's just say if he did feel anything once, he gave it up to God.