Rep. Joel Kleefisch says Parents will love having strangers with guns in their kids schools. It will be safer....

UPDATE: The amendment below has been scrapped...for now.

What every parent needs to see is a stranger with a loaded gun in their kids school. Ya think?

You’d have to be stone cold crazy, like Rep. Joel Kleefisch, to think something this idiotic is a good idea. 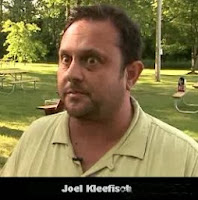 Anyone with a concealed weapons permit could carry a gun onto school grounds in Wisconsin under a proposal being put to a vote Thursday by the Republican chairman of the Assembly Criminal Justice Committee.

Allowing any of the roughly 203,000 people who have a concealed weapon permit to bring a gun to school doesn't have enough votes in the Republican-controlled committee to pass, said its sponsor, Rep. Joel Kleefisch, R-Oconomowoc. The goal, he said, was to start a discussion about school safety. “I’m not sure the citizens of Wisconsin want concealed weapons holders on school grounds,” Kleefisch said.

Let me get this right, Kleefisch assumes no one wants this law, but we should at least start talking about because, who knows, we might get used to the idea? Here's WKOW's Greg Nuemann with the story:

But our kids will be safer with complete strangers with loaded guns in our schools, right? 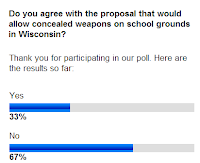 The goal is to make schools safer, Kleefisch said. Schools need armed people who can fight back if there is an attack, he said.

Kleefisch also backed legislation promoting crossbow hunting near schools. What is it with this guy about weapons and schools?
Posted by John Peterson, Democurmudgeon at 10/30/2013 05:26:00 PM