Republicans are nasty. It looks like Gov. John Kasich just bypassed his Republican legislature. Funny when there dirty little tricks are used against them.

An Ohio board has voted to accept $2.5 billion in federal funds to expand its Medicaid program. “Together with the General Assembly we’ve improved both the quality of care 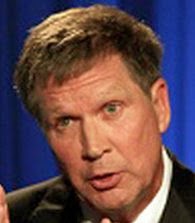 from Medicaid and its value for taxpayers," Ohio Gov. John Kasich said.

The Columbus Dispatch describe what happened next: With the Republican-controlled legislature declining to approve the expansion, [Kasich]  instead sought the expansion on his own from the federal government and went to the seven-member Controlling Board for approval to spend the money.

To help ensure the request got the needed votes, Speaker William G. Batchelder, R-Medina, this morning replaced Rep. Cliff Rosenberger of Clarksville with McGregor, a moderate, term-limited Republican who had said he would vote for the measure.

This might not be the end of the story: Some Ohio House Republicans are prepared to sue the Kasich administration for moving forward on the Medicaid expansion after they did not approve the program. But, at least for the moment, Ohio is the 26th state (and fourth controlled by a Repubilcan governor) to sign onto the Obamacare program.