What's not to like about the following Mary Burke positions? After reading this, you'll understand just how suffocating the Walker Authority has been for this state. 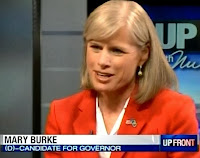 expanded private school vouchers statewide, which Gov. Scott Walker did in this year's state budget. However, Burke said if elected she would keep the statewide program in place with a cap of 1,000 students, and seek accountability for private schools receiving public funds in Milwaukee.

She backs same-sex marriage and voted against the 2006 constitutional amendment banning it … She also supports the state's domestic partner registry … she opposes a Republican proposal to give universities, technical colleges and educational service agencies the ability to create charter schools. She said school boards should have control over charter schools … She also said she would like to see future increases in school funding authority be tied to increases in state aid, which effectively would keep property taxes in check.


jsonline-Dan Bice: Trek — a company founded by Burke's father and a place she worked for nine years — is fighting a petition filed by a state official saying the firm outsourced some 15 to 20 jobs from its Waterloo plant to China earlier this year. A spokeswoman for the company said it is fighting the petition. "What I can tell you is that no outsourcing occurred," said Trek spokeswoman Marina Marich.

Joe Zepecki, a top aide on Burke's campaign, said the candidate was unaware of the current dispute. He added that Trek's record of creating good jobs in Wisconsin "speaks for itself."

There's an interesting argument going on that I think needs clarity. Outsourcing (offshoring really) jobs will happen no matter how we try to avoid it. But for me it's the size and intent of that offshoring that's important. 20 lost jobs is never anything to marginalize, and we have to wonder why Trek wants to fight retraining these workers or simply give them some compensation, but outsourcing a few jobs isn't the same as closing down an entire manufacturing plant.
Posted by John Peterson, Democurmudgeon at 10/21/2013 11:37:00 PM