"Unintimidated"...I can't get past the title.

The biggest issue I have with Scott Walker's book "Unintimidated," about union busting and the massive protests that followed statewide, is not contained in the ego dripping 288 pages, it's the title!! 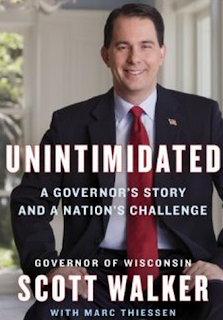 Unintimidated tells us one thing very clearly; Walker missed the message of the protests entirely. Instead of tempering his ambitious agenda, he felt intimidated. Self esteem issues much?

Intimidation? The balls it takes to see the public in that twisted condescending way.

Unintimidated? Since when is public dissent over government policy a form of "intimidation?" I always saw it more as "public sentiment," you know, citizens telling their "representatives" how unhappy they. Did I get the whole meaning of the constitution and representative government wrong?

Unintimidated? Whether it was the publisher idea of the title or not, Walker liked it so much he's right there on the cover.

Unintimidated? Do Republican politicians really feel that way about their constituents?

Unintimidated? This one word describes just how much separation there is now between the people and those who have taken control our elections; business. The new frac sand mining bill is one of the most egregious examples yet, that simply strips away all local control. What's to stop Republicans from apply this approach to everything?

Unintimidated? The Right Wing Authoritarian (RWA) movement in this country just keeps plowing ahead will no media awareness at all.