Dumb Ron Johnson has a long way to go before he understands the first thing about ObamaCare, his avowed arch enemy. But he doesn't get almost everything else either, and for good reason, because it requires thought, reflection, and logic! 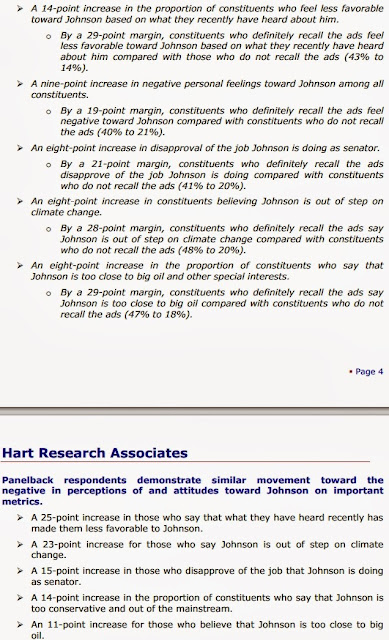 Take climate change. A new poll dug up some interesting stuff on Johnson from Green Bay residents. From the League of Conservation Voters/Hart Research:


WaPo: The group’s polling memo is right here. The group polled on Senator Johnson in the Green Bay, WI, media market — a swing area where its ads ran — before and after the ad buy. According to the memo:

52 percent of constituents who definitely recall the ads volunteer unfavorable impressions of Ron Johnson and his record in an open-ended (unprompted) question format, and most of the concerns they express relate directly to the content of the ads. The memo also reports a 14-point increase in those who feel less favorable towards Johnson based on what they have heard about him; an eight point increase in his job disapproval; and an eight point boost in in constituents believing Johnson is out of step on climate change. (For more on Johnson, and the results the polling found on climate-denying House GOPers, read the whole memo.)

Top Dem pollster Geoff Garin tells me, “We’re finding that when voters hear about an elected official denying basic climate science, it is consequential in the way they think about that person, both in terms of the issue itself, and in terms of larger conclusions voters draw about whether that official thinks the way they do.”

The larger story here is that, even as the prospects for Congressional action on climate change remain bleak, some Dems, even in swing states, are increasingly seeing benefits in talking publicly about the issue.