Picture Dumb Ron Johnson as the father figure, sternly disciplining a group of children when they don’t do what they’re told.

Now consider his ridiculous new bill that would not just discipline congress for not passing an appropriations bill, but it would also cut spending by 1 percent every 60 days they don't agree to something. That sounds like a gift to Republicans who's whole purpose in life is to not pass anything, and still get spending more spending cuts. Gee, what a plan Ron. NewsMax:

Johnson is co-sponsoring a bill in the Senate that would eliminate the threat of a government shutdown over the debt ceiling. He explains: "I don't believe we should 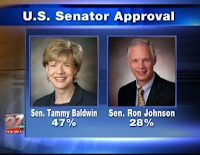 be playing with our economy. So what I've been supporting is a couple of pieces of legislation, one in the Senate sponsored by Rob Portman ... End the Government Shutdown Act is what they call it. I call it the No More Government Shutdowns Ever Act."

"What it basically does is, if you don't come up with prioritized appropriation bills, you continue to keep the government open. We'll fund it at the current levels. If after 120 days or 90 days, depending on the bill, you can't come up with a prioritized spending bill, we'll just drop the spending by one percent. Another 60 days goes by without a spending bill, we'll drop another one percent. That's the kind of blunt control that we need to impose on this very dysfunctional federal government.

Sounds so responsible. Especially when we're dealing with a bunch of adults elected to run the government...they need the threat of a penalty-like little children-to get something done? Amazing:
Posted by John Peterson, Democurmudgeon at 10/30/2013 12:17:00 AM