Guess who started the process of selling off public land our West? The Republicans during the shutdown.

Small government is one thing, dismantling and offloading our parks to private interests is just plain insane. I can’t believe anyone would put these pirates in charge of anything, especially something they've made very clear, they hate. From Think Progress:

Congress from holding hearings, including one Thursday in the House Natural 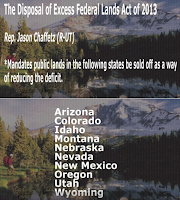 Resources Committee on a bill that would force a fire sale of 3.3 million acres of public lands.

The Disposal of Excess Federal Lands Act of 2013 (H.R. 2657) from Rep. Jason Chaffetz (R-UT) would mandate that public lands Arizona, Colorado, Idaho, Montana, Nebraska, Nevada, New Mexico, Oregon, Utah, and Wyoming to be sold off to the highest bidder as a way of reducing the deficit. The areas to be sold are based on an outdated report from 1997, although the bill directs the Secretary of the Interior to “update” that report.

However, evidence shows not only that voters oppose selling off public lands, but that they are incredibly important economically.

In short, it takes valuable tourism dollars out of a state’s general fund. Think about the idea of taking one time money for our natural parks that will go on forever.
Posted by John Peterson, Democurmudgeon at 10/27/2013 11:50:00 PM