Using a tactic they would never think of doing themselves during a recession, Republicans just by coincidence, believe this time austerity is the solution. Funny they would think that under a Democratic administration. From the Economic Policy Institute: 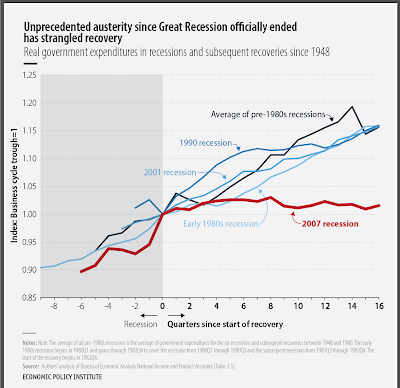 It shows clearly that public spending following the Great Recession is the slowest on record, and as of the second quarter of 2013 stood roughly 15 percent below what it would have been had it simply matched historical averages. This spending austerity has enormous economic consequences—if public spending since 2009 had matched typical business cycles, this spending would be roughly $550 billion higher today, and more than 5 million additional people would have jobs (and most of these would be in the private sector). In fact, this extreme cutback in public spending can entirely explain why the recovery from the Great Recession has been so sluggish compared to recoveries following previous recessions.

And, needless to say, the latest fiscal showdown has done nothing to reverse this deeply damaging trend.

Is it any surprise that finally, the public has noticed.


Fifty-four percent think it's bad that Republicans control the House, the poll found. That's up from 43 percent in December 2012, during the last fiscal standoff. The figure is the first time a majority thought Republican control was bad for the country since CNN started asking in December 2010.

Labels: Austerity
Email ThisBlogThis!Share to TwitterShare to FacebookShare to Pinterest