Public Apology Demands by petty Right Wingers part of their brand, not part of the Democratic Party's DNA.

I found the following piece of conservative projection funny and clueless. Blogger Christian Schneider wants liberals to be just like Republicans. Like I've told my conservative friend in Milwaukee so many times before, liberals are nothing like conservatives; we don’t act, think or have any inclination to be like them, ever.

One of the dumbest ploys in the conservative quiver is the “public apology.” This modern form of public shaming is childish and so transparently political.

And I would never ask a Republican to apologize for something they said honestly. Their inadvertent slips reveal who they are, and an apology doesn't take that back. It's what they probably say behind closed doors anyway.

So in reaction, Schneider feels so embarrassed by his own parties low information voters actions, that he wants to falsely equate Democrat criticisms with the racist, bigoted, gun toting senselessness of the teabilly party:

jsonline: Being liberal means never having to say you're sorry: Last month, the Madison Public Library Foundation ... scheduled an author meet and greet with William Ayers, a domestic terrorist and co-founder of the Weather Underground … It's not as if the liberal city of Madison is new to domestic bombers. For decades, the city has been home to Karl Armstrong … But thank God neither of these guys did something truly objectionable, like opposing Obamacare.

Conservatives are constantly having to apologize for the actions of fringe members of the Republican Party (whether they are actually Republicans or not). Every time some dope stands on a stage and demands President Barack Obama "put down the Qur'an," it is treated as if it were a strain endemic to the GOP.

These apologies even extend to "legitimate" actions, such as the tea party's mission to shut down the government in a feckless attempt to defund Obamacare. There has been a long, thoughtful debate on the right about the tea party's tactics … Yet there is rarely such reflection on the left when it comes to their party's most extreme elements. Democrats almost never have to account for the intemperate actions of their cohorts on the left.

Are you crying alligator tears yet? 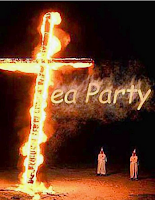 Take, for example, Democratic Florida Congressman Alan Grayson, who last week sent out a fundraising email likening the tea party to the Klu Klux Klan, using a picture of a flaming cross to form the "T" in "tea party." If Grayson were a Republican, he'd be hung around the neck of every GOP politician across the nation.

I thought Grayson's picture was an over-the-top, hard truth about the tea party.

But Schneider, like every other Republican, considers actual criticism “name calling.” For instance, turning working Americans into low wage take-it-or-leave-it employees who can't get food stamps and are denied unemployment, is a form of slavery, so…

In his soon-to-be-released book, Gov. Scott Walker recalls when AFSCME leader Marty Beil called him a "tyrant," saying, "This is all about Scott Walker kind of bringing back, instead of public service, it is public servitude." Beil added, "He's the master of the plantation and we're supposed to be his slaves; that's his philosophy here." Beil made those comments in December 2010; Walker hadn't even taken office yet.

Of course, we all know what would happen if one of the Koch brothers would, say, compare Obamacare to slavery. Conservatives would have to rush to disavow it. But Beil helped orchestrate the Wisconsin Senate Democrats' flight to Illinois to jam up the Legislature for three weeks; he's no bit player. Yet Democrats' obeisance to Beil in blocking government is seen as "fighting for justice," while tea party actions to thwart Obamacare are something for which Republicans apparently have to apologize.

It’s hard to miss the false equivalence here, isn't it?

It's not as if there's a shortage of "what if the shoe was on the other foot" examples. At an anti-shutdown rally in Washington, D.C., two weeks ago, someone waved a sign saying "THANKS TEA-TARDS." Yet I would bet Sen. Tammy Baldwin (D-Wis.) isn't worried that she's ever going to have to explain why she's allied with some of these people.

Next time there's a big showdown between the parties, resist the urge to reflexively blame the tea party. Instead, think about whether the "Scott Walker is a slave owner" contingency is pulling the Democrats too far in their direction.