Medicaid expansion is a smart thing, a beneficial thing for taxpayers. Governor candidate Mary Burke agrees, and will expand Medicaid if she’s governor, taking our own federal tax dollars back to do just that: 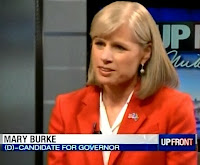 WSJ: "I would definitely accept it," Burke said. "It defies common sense that we would turn down $120 million that frankly is the money of Wisconsin taxpayers. Federal money is our money and we should make sure we are getting our share of it. This is making health care more affordable for tens of thousands of people in Wisconsin."

The media is quick to print without correction or follow-up question this really dumb response:

Wouldn't real help come in the form of jobs and a paychecks? Oh, that’s right, Walker failed to provide that opportunity because he broke his jobs promise and stunted consumer spending.


You don’t kick people off the safety nets and say the problem solved. Walker’s easy draconian solutions push aside his failed policies, hoping no one like his low information supporters will notice. See, people no longer are dependent on government.
Posted by John Peterson, Democurmudgeon at 10/16/2013 01:53:00 PM