Wisconsin’s getting that “not so good” attention again, thanks to Dumb Ron Johnson.

The Daily Beast covered the feud between Johnson and radio crackpot Mark Levin, and gave us a peak at how the nation views Dumb Ron Johnson. It’s a wonder this guy ever got elected, especially against the best senator from Wisconsin, Russ Feingold.

Check out this jaw-dropping and honest assessment of Johnson, the way the nation sees our politician:

Johnson, one of the most conservative senators in the country, was elected in the 2010 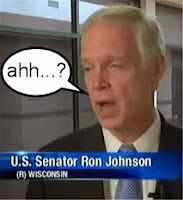 Tea Party wave. Please understand: Johnson is a really, really, really conservative guy. Like, way out there on the right. He says, believes, and votes in a very conservative way. He voted against the Employment Non Discrimination Act. He has an “A” rating from the National Rifle Association. He doesn't believe abortion should be legal. He believes marriage should be only between consenting adults with opposing reproductive organs. He doesn't trust scientists on climate change. He even voted against a bill to benefit the disabled and supported by former Republican leader and World War II veteran Bob Dole. In front of Dole! On the Senate floor! I looked hard to find Johnson saying or voting for anything a liberal American would agree with and came up empty. I don’t think it’s unfair or insulting to say Johnson lives on the far right of American political thinking.