Tea Party Nation? We're headed there and laughing about it...

Those man on the street, heart sinking spectacles that show just how dumb people are about their own government, shouldn't be something we can laugh about. It should take our breath away and be a warning.

This opinion piece I thought said it pretty well: 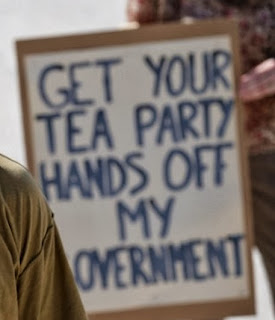 CNN-LZ Granderson: I'm a sucker for all of those man-on-the-street interviews that late-night shows do to reveal just how dumb Americans are. It's all fun and games until you remember that elections have consequences, and that many of those people who said they could name the president -- but not the commander in chief -- will soon be standing in a voting booth, armed with a ballot.

The Organisation for Economic Co-operation and Development (OECD) released its findings from the Survey of Adult Skills. The group's research measured the literacy, math and computer skills and compared those numbers with that of 21 other countries.

The OECD findings seem to be consistent with that of the U.S. Department of Education, which estimated back in 2009 that some 32 million adults lacked the proficiency to read a newspaper. This was captured by a witty USA Today headline about the findings: "Literacy study: 1 in 7 U.S. are unable to read this story."

That was kinder than the New York Post headline after the new OECD report: "U.S. adults are dumber than the average human."