Walker's high speed rail debacle just got millions of dollars worse, and Republicans don't seem to be taking the heat. Wake up taxpayers, media in general. 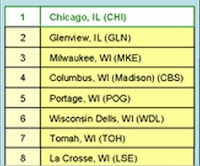 low information tea party voters to turn down the high speed rail deal, killed mass transit for the state. This was nothing but a drummed up wedge issue used to rile up supposed tightfisted Wisconsin taxpayers who, surprise, are now on the hook for tens of millions of dollars being spent on rail upgrades due to higher ridership demands. Gov. Dolye's deal would have had used federal dollars instead.

There was a reason for high speed rail; demand. But teabilly voters hate government so much, they irrationally said no, and so did Scott Walker. They also wanted to keep Madison out of the mass transit loop permanently. Instead, small towns along the Empire Builder rail route through the state will be a part of commuter rail, avoiding high population, high ridership area's like Madison. Columbus, Portage, the Dells, Tomah all will benefit.

This was one of Walker's biggest and most costly mistakes to taxpayers. The following story lays it out:


Biz Times: Gov. Scott Walker rejected $810 million in federal funding for high-speed rail service between Milwaukee and Madison in 2010. However, the Wisconsin Department of Transportation is involved in a pair of studies examining the feasibility of expanding existing Amtrak service in the state. The plans are in response to record Amtrak ridership ... One study being done by the Wisconsin DOT, Illinois DOT, the Federal Railroad Administration and Amtrak is examining plans to increase service on the Amtrak Hiawatha route between Milwaukee and Chicago from 7 daily round trips to 10 daily roundtrips.

Who could have seen it coming?

Annual ridership on the Hiawatha route has grown from 397,500 in 2002 to 832,500 in 2012 (a 109-percent increase) ... The Hiawatha line is Amtrak's busiest Midwest line, said Amtrak spokesman Marc Magliari ... "(The Amtrak train) is more reliable, more convenient, more comfortable and it can be less expensive when you consider the true cost of driving that includes gas, parking and tolls."

Two new train sets were built for the state of Wisconsin by Talgo Inc. ... but remain in storage after the state reneged on the deal ... the state only paid about $37 million of the $47.5 million purchase agreement for the trains and has refused to pay for a 20-year maintenance agreement, costing about $4 million a year, and costs for a maintenance facility and equipment ... if the state could settle its dispute with Talgo, those trains could be used for the expansion of service on the Hiawatha and Empire Builder lines.

And still not admitting just how stupid it was to turn down the high speed rail deal that would have paid for all of this:


Assembly Speaker Robin Vos (R-Rochester) said, "Racine area businesses have seen a big increase in demand, and that is part of the reason for exploring the expansion. I will take a close look at the results of the study once it's completed."