Paul Ryan Book Tells Us Where to Go, but not how...again.

You’ll notice Paul Ryan’s book title quietly sidesteps “the how,” by again not telling us even “Where Do We Go From Here?” Ryan will gladly lead us down the path to prosperity, if we just allow ourselves to believe in his completely untried free market form of government. Anyone?

Cap Times: Rep. Paul Ryan’s book is called 'Where Do We Go From Here?' and is scheduled for publication in August. '"Where Do We Go from Here?" will delve into the state of the conservative movement in America today, how it contrasts with liberal progressivism, and what needs to be done to save the American Idea,' according to a statement from the publisher.

Now hold on there. What “American Idea?” We don’t have anything like that that I know of, unless we’re not as free and independent as we thought.

This is the party that wants government to leave them alone? It sounds like they want government to tell them what the “American Idea” is, and then fall within the lines of that “Idea.”

“Conventional thinking” gets a once over too, with the same old Ayn Randian/Milton Friedman anti-Catholic treatment:

"It will challenge conventional thinking, renew the conservative vision for 2014 and beyond, and show how it is essential for the well-being of our communities and the future of our nation.'"

I think Scrooge had that same conservative vision: 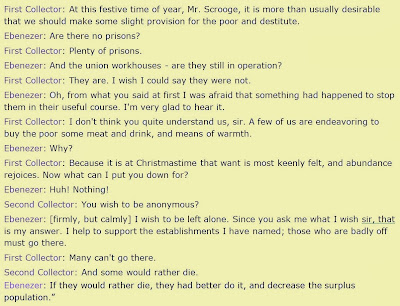