Doing a little back research on my own blog, I came up with these "Believe it or Not" forgotten facts:
Wisconsin State Journal had this interesting and obscure article: 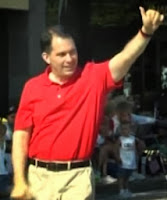 On a net basis, the state has 7,557 more businesses than on Dec. 31, 2010, just before Walker took office. The turnaround came in large part from an addition of 6,699 domestic limited liability corporations, by far the largest category … Most of the new registrations typically are Limited Liability Companies (LLC's) set up for tax or liability purposes and employ no one.


At the Governor’s Small Business Summit in Stevens Point, Governor Scott Walker today announced 11,590 new businesses have been created in the state since he took office, according to statistics from the Department of Financial Institutions (DFI).

The most embarrassing part of his jobs promise, which even I forgot about, was this amazing fact:

Making my argument for me, and another fact hidden during Walker's first run for governor:


Walker's primary opponent, former U.S. Rep. Mark Neumann … quoted statistics that suggest Milwaukee has one of the nation's worst records of retaining jobs. "If Scott Walker had a plan to bring jobs to Wisconsin he should have implemented it in Milwaukee sometime during the last eight years," Neumann said.


Chippewa Herald: A new candidate is looking to challenge Gov. Scott Walker as a Republican — a move that would force a GOP primary. Patrick O’Brien, 49, of New Glarus, said Wednesday that he plans to challenge Walker in a Republican primary. “I thought he was running as a brown bag Republican,” O’Brien said. “What we were getting was a brown shirt Republican.” O’Brien said he would work to promote and help grow the dairy industry in Wisconsin. “I want farmers to be able to join the state health insurance program at the cost to the state,” he said.

So again, how is Walker doing?