Yeah, this is big news.  Expect this to surface again in ad’s from Walker’s Democratic opponents.

But all that is about to taken an ugly turn. The Cap Times Mike Ivey has the story:

Top officials with the Federal Reserve Bank of Philadelphia are warning Wisconsin Gov. Scott Walker, Wisconsin Manufacturers & Commerce and others that they are misusing a monthly index produced by its top economists. Walker in recent speeches has been touting figures from the “Philly Fed,” claiming they show Wisconsin’s economy as No. 2 in the nation. WMC has been using the same number in a series of advertising buys, thanking Walker for putting the state on the road to prosperity.

But officials with the Philly Fed, who have been following the situation in Wisconsin, issued a statement Friday saying it’s a misreading of their "Coincident Indexes" to try and compare one state to another. 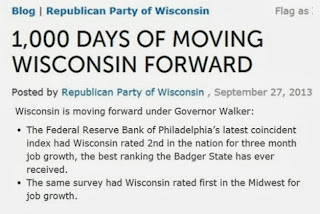 They say the index — which is comprised of several different economic statistics including housing starts, unemployment claims and wages — isn’t designed as a ranking. The Fed does not calculate a ranking based on the index and never has.