An increase in the states debt level isn't something the Democrats should hide someplace in the arsenal until election day. The time is now to drive the point home, over and over, because it's only going to get worse when future tax cuts kick in. 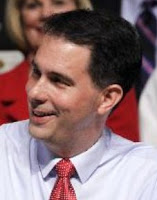 I've always liked PolitiFact's research, but always hated their sometimes ridiculous conclusions. Rachel Maddow is another person who has trashed PolitiFact over and over, for good reason.

Well, add Bruce Murphy to your list. He couldn't take their recent "Half True" rating for something that is utterly true. Here's the story about Scott Walker's amazing spending spree:


CapTimes-Mike Ivey: Milwaukee columnist Bruce Murphy is out with a good one that takes the Milwaukee Journal Sentinel to task for seemingly offering cover for Gov. Scott Walker's fiscal policies. State Sen. Kathleen Vinehout, D-Alma, last month wrote an op-ed piece where she claimed that state debt had reached “record levels” and that “more money goes to pay off debt in this budget than ever before.”

"It is a damaging charge that goes to the heart of Walker’s image as a fiscal conservative who was going to reduce government spending and debt," writes Murphy.

So a PolitiFact Wisconsin column on the issue but gave Vinehout a grade of "Half True" … rating was based on the fact that Walker had inherited state debt from his predecessor, Jim Doyle.

That is above the 4% threshold that Doyle and all previous governors had tried to meet through sound budgeting, Murphy says. Murphy goes on to say that Vinehout's point is completely valid and that debt under Walker has indeed reached record levels. But somehow, he says, the Journal Sentinel only rates her claim as a "Half Truth."

"This distortion will be of great help to Walker when his opponent claims he is the first governor in history to push the debt level this high," writes Murphy. "Walker can quickly blast this as factually inaccurate, as determined by the PolitiFact column of the state’s largest newspaper."