Walker's ObamaCare Mess!!! Why is the media not getting it?

Scott Walker and his lying staff in the state's health services department have done everything they can to confuse Wisconsinites about the exchanges. They've been working real hard alright, making it almost impossible to get any answers.

Has any reporter tried to sign up for ObamaCare, or get help from a health care "navigator?" No.

The Walker administration has constructed a Salvador Dali like plan that will frustrate and anger anyone trying to cover their family, or just themselves. I've followed their advice
and ran into links, linking to links, that lead nowhere.

The media reporters are so out-to-lunch on the Affordable Care Act too. And why not, they have employer provided coverage. I've been on the open market for the last 15 years, and it's been a nightmare. I've had to shop around every other year, trying to dodge the 20 to 30 percent increases on my monthly premiums. And I'm talking about the cheaper catastrophic HSA plans that include a $10,000 deductible.

Instead of a website with a list of regional "navigators," with locations/phone numbers, navigators have to instead reach out with library seminars, phone calls and maybe even sidewalk sandwich boards. Citizen Action of Wisconsin has been covering this disaster but is getting little media attention. This is a mess. 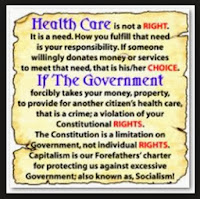 Did you know the only way for Wisconsinites to sign up for the Affordable Care Act is through the federal governments website? You have to wait until October 1st to signup, and submit income stats, SS numbers, and your age. Go to healthcare.gov or call (800) 318-2596, and see how much easier this really is.

But what Walker is counting on is an avalanche of negative experiences, bad press, voiced by a majority of 90,000 former BadgerCare recipients left hung out to dry. jsonline:


The Big Lie: Gov. Scott Walker's administration say it's ready for the hundreds of thousands of Wisconsinites who will have new options for shopping for health coverage. the state's deputy health services secretary Kevin Moore said the Walker administration believes about 700,000 state residents will be looking to buy coverage through a new online federal health care marketplace known as an exchange, Moore acknowledged that consumers could find the new landscape difficult to navigate, and said they should reach out for help from state and county benefits workers, insurance agents, local nonprofits and so-called navigators licensed by the state.

Does that sound easy? It's intentionally convoluted, a maze no one in their right mind would call helpful, and just the way Walker planned it.


"Walker's plan to reject the Medicaid expansion, in addition to costing the state more money, is leading to more confusion and complication for many of Wisconsin's most vulnerable citizens," said Robert Kraig, executive director of the liberal advocacy group Citizen Action of Wisconsin.