(See Minor update below)
Scott Walker signed into law a bill that allows big government to take family farms and basically everything else a person has earned their entire life. He may have even broken federal law to do it.

I warned about this a while ago after Walker put his stamp of approval on it. It's no secret Walker and his band of political pirates want’s to reduce the size of government, the democratic kind, and turn it into what Bush once called “the ownership society.” Owners vs us.

We're finding out that the Republicans supposed dislike of government is nothing more than a clever way of covering up for their lack of maturity and common sense to manage government responsibly. 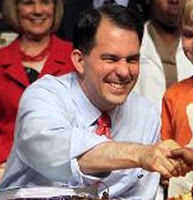 WSJ-Dee J. Hall: The state Department of Health Services has new powers under the state budget to recover money from the estates of people whose loved ones have received Medicaid funding for long-term care … the Legislature’s budget committee is scheduled to debate whether to rescind some or all of the powers it gave the administration of Gov. Scott Walker … Moreover, the Legislature’s own nonpartisan legal and financial agencies have warned that the changes … could violate federal law, which governs the use of federal Medicaid funds. Critics say the changes could prompt some elderly couples to divorce and make it harder for children to inherit the family farm or business.

The Walker Authority trotted out the old, and now tired excuse for doing every lousy thing they want to:

DHS officials have defended the new powers, saying they will save taxpayers money.

I've got an update for Ronald Reagan's 9 scariest words (now 11): “I'm from the government and I'm here to save taxpayer money." Walker decided to expand what the government can take from hard working Americans:

The changes require individuals whose spouses got Medicaid-funded nursing home services to forfeit to the state the full cost of those services when that surviving spouse dies. They also place limits on the ability of surviving spouses to transfer assets to their children. A couple’s home is exempted … But under the new law, proceeds from the sale of that home could be taken by the state to repay Medicaid used to pay for a spouse’s nursing home or other long-term care, elder law attorneys say. “It greatly expands the types of property the state can go after … In the past, the state could not go after the property of the (non-Medicaid receiving) spouse.”

Is that your idea of small government? Teabilly silence on freedom and liberty? How long before taxpayers give up everything, just so we can supposedly save taxpayer money? This goes well beyond the perceived horrors of the “death tax.”

Health Care used as a Hammer? Long term care insurance has always cost too much for families to afford. Even ObamaCare abandoned coverage for those same reasons. Don’t forget about medical bankruptcy’s either. So, let’s get out the health care hammer:

The provisions penalize elderly people who have already paid into the Medicaid system through a lifetime of taxes … DHS officials said the changes make the system more fair … “state and federal taxpayers should not be forced to fund an individual’s long-term care so the individual can pass on an inheritance to their heirs or beneficiaries” … allow (s) DHS (to put) liens on their homes or other mechanisms to get the proceeds from assets, such as vehicles, that in the past were outside of the government’s reach … (that) “appear to present conflicts or potential conflicts with federal law” in part by broadening the definition of assets that the state could seek for repayment.

“It’s like something you might see in an authoritarian country, like China,” said Elder law attorney Bruce Tammi, an adviser on the State Bar of Wisconsin’s elder-law section.

UPDATE: Nothing to get excited about, but at least something was done, although it’ll have almost no impact.


jsonline: Lawmakers Wednesday pared back new rules allowing the state to collect back more of its health care spending on the elderly from their estate … The state bankers lobby also contends the new law would cost banks millions of dollars in initial and ongoing costs — potentially more in the first year than it will actually bring the state in terms of additional money.

"The compliance costs to the private sector will greatly exceed the revenue to the state of Wisconsin and create additional regulatory burden, liability and potential for legal action, including potential class-action lawsuits," according to a letter to lawmakers from the Wisconsin Bankers Association.

But Republican defenders of taxpayer dollars and over regulation are whining about how life isn't fair:

Sen. Glenn Grothman and Rep. John Nygren said it was about fairness for taxpayers.

Under the panel's vote Wednesday, the Walker administration could not implement some of the provisions in potential violation of federal law, though all of those state provisions would remain on the books. Rep. Jon Richards (D-Milwaukee) said "We are essentially double-taxing people who played by the rules and paid taxes their whole life," Richards said. "What we created in the budget was an expensive and confusing mess." The rules are so complex that it can be difficult to give a simple example of how they worked in the past, would have worked under the budget provision and will now work under the Joint Finance action.

Take, for instance, the example of a husband who goes into a nursing home and dies while his wife remains on the farm that they hope to pass on to their son. What ultimately happens to their farm and their other assets will depend on a whole range of factors, including: how they held that property; whether they transferred it to someone else, when they did and how; whether the wife remarries; and even whether a future spouse brings into the marriage any new assets, which could be potentially affected by the new rules.