Thank You Scott Walker, state firmly in Bottom Half of Job Creation

Maybe we've been giving Republicans like Scott Walker too little credit for incompetence. It occurred to me when I was watching Walker speak from another business that should be on some kind of liberal boycott list, about how he's going to meet with other job creating businesses...blah, blah, blah. 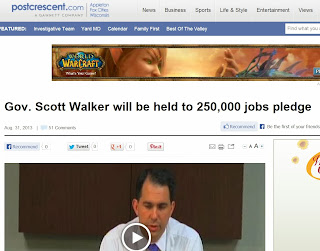 Walker the Dupe!!! It appears that all of these so-called job creating businesses don't apparently have Walker's back, because they're not creating jobs. But businesses like the goodies, including tax cuts and handouts from the Walker administration. So of course they're going shout "Bravo" every time he finds his way back into Wisconsin, they want taxpayer supported welfare...and they're playing Walker for a dupe.

The press won't say it, but if Scott Walker did nothing at all as governor, the national recovery would have produced the same or better numbers of new private sector jobs in the state. Actually, we would have much better numbers based on the job growth left by former governor Jim Doyle. Walker negatively impacted growth by opposing job creators not on the conservative list of donors.

The steady incline has nothing to do with Walker or the drunk with power Republican dictators at the Capitol. jsonline:


Wisconsin added 24,305 private-sector jobs in 12 months, according to new data … the figures give the state a rank of 34th among the 50 states in job creation in the 12-month period.

The bottom half of the economic recovery?

I thought this comment laid it out rather well:


"Walker inherited an economy that was doing 0.23% *better* than the nation, 1.50% vs the national figure at the time of 1.27%. If we'd stayed that far ahead, we'd be within touching distance of his 250,000 promise by the end of next year, but that's completely out of the question now.

As it is, Wisconsin's employment (as measured by CPS) hasn't kept up with population growth since January 2011."


In his response Thursday, Walker focused on a new method of ranking, which hasn't been used previously. That ranking said Wisconsin came in 22d out of 50 in private-sector job creation when ranked in absolute number of new jobs, not in terms of percentage change.