One thing is clear, Scott Walker is running a "kitchen sink" campaign, throwing in every diversion he can to detract from his record.

The wise and wonderful Walker says he's got an ObamaCare replacement, a whole pocketful of em, if Obama's smart enough to delay his signature legislation. 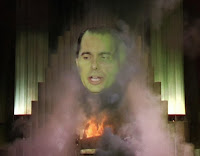 Gov. Scott Walker on Tuesday said Wisconsin has a plan to cover low-income people being pushed into federal health care exchanges, should the federal government delay implementation of the Affordable Care Act ... "There’s probably a good 10 to 15 possible options," Walker said. "I think we’d be prepared to handle any of them."

Ah, how about just one example that makes sense? One? Walker is counting on his campaign aiming so high (a run for president), that he can't lose his meager statewide reelection:

Walker said he is urging the federal government to delay implementation of the Affordable Care Act, not because he ideologically opposes it, but because of concerns that it will "put a wet blanket" on the recovering economy.

See, Walker's failed agenda isn't the reason for his horrific jobs record, it's the promise of health care security for Americans. Walker said people don't want to be told they can now go to the doctor if they want:

"I've done just about everything possible to make my position clear, that I don’t think the federal nor the state government should tell me or any other family what they can or can’t do with health care," Walker said.

Here's WKOW's Greg Neumann with comments from Walker and a nice dig from Rep. Mark Pocan:


The wise and wonderful Walker knows what people are thinking, because that's what makes him a "leader:" Walker's wizardry does not extend to math though. He seems to think covering people over the poverty level makes it harder to cover people at the poverty level...Heck, you try to figure it out: