The Republican Party of Wisconsin is still having a fit over the idea that a Democratic millionaire like Mary Burke, would unfairly use her money to try and buy the governorship. It’s not for sale. Outrageous!!!

Here are two of the most recent "news" stories at their site: 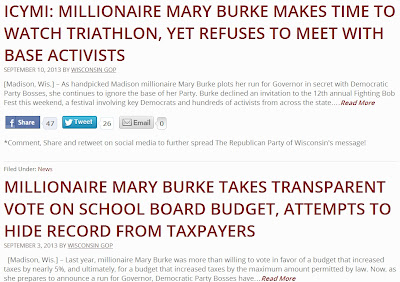 Did you know Mary Burke is a millionaire? Yet in 2012, Republicans specifically recruited millionaires to run. Hell, without their sugar daddy million/billionaire donors, the Republicans field of candidates would have thinned out a lot sooner. Anybody notice how foolish these millionaires were with their money backing desperately out-of-their-league candidates?

Republicans are still pushing every millionaire they can find into running, all the while skewering Democrats for taking the same approach:

jsonline: Tom Foley, a former venture capitalist, is expected to run as a Republican for governor of Connecticut again hoping to take advantage of Gov. Dan Malloy’s low approval ratings this time.

Bruce Rauner, who's worth close to $1 billion (and) ran a large private equity firm for 30 years, (is) seeking votes for (Illinois) governor.

Instead of political skills or experience, they have chutzpah - and a lot of money … A class of wealthy Republicans who take inspiration from Gov. Rick Snyder of Michigan and Sen. Ron Johnson of Wisconsin, who left the business world in 2010 to beat established Democrats in Democratic strongholds.

So does gerrymandering and money in politics have anything to do with this...

For the first time since 1952, the one party holds the governor's office and both houses of the legislature in 37 states.