No really, did you hear the one about United Sportsmen...again?

Bare naked handouts to donors and cronies of the Walker administration and legislature was a ballsy move, no doubt about it. It was a $500,000 taxpayer giveaway that would repeat every two years.

Now both Walker and former Rep. Scott Suder-who pulled a guilt ridden disappearing act, have been fingered for putting taxpayers on the hook, endangering federal tax dollars, and secretly slipping this one by their own fellow Republican joint committee members.


According to the university's student paper, the Marquette Tribune, Walker violated campaign guidelines on numerous occasions when running for the student body presidency. The student paper called Walker unfit because he had distributed a mudslinging brochure about his opponent, and several of his campaign workers, upset with the endorsement of his opponent, took piles of the paper and threw them away.

What we're seeing here is a repeat offender. I wonder what it would be like if Walker had ultimate power? I guess we now know the whole ugly story: 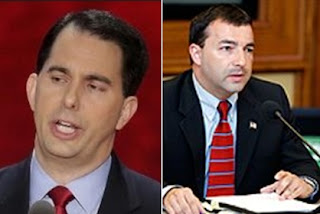 jsonline-Patrick Marley and Jason Stein: GOP lawmakers plunged ahead with a controversial $500,000 grant to a politically connected sportsmen's group even though federal officials had warned Gov. Scott Walker's administration that the grant endangered $28 million a year in federal money for protecting state wildlife, records show … It also ultimately ended up putting state taxpayers entirely on the hook for the grant, when federal taxpayers could have potentially covered a large share of the cost.

The U.S. Fish & Wildlife Service sent two sharply worded letters to the Walker administration after lawmakers on the budget committee hastily slipped the grant into the state budget. The letters said the proposal would cost the state $28 million in annual federal money. Lawmakers worked on the budget for more than two weeks after the state received the first letter, but didn't fix the provision to guard the federal money.

Sen. Luther Olsen (R-Ripon), who sits on the budget-writing Joint Finance Committee, said he was stunned that the administration didn't tell him about them. "I'm relatively speechless," Olsen said. Aides to the four Democratic lawmakers on the Legislature's Joint Finance Committee said that none of their offices had been contacted by the DNR or the governor's office … Walker spokeswoman Jocelyn Webster said "It seems a little ridiculous (some lawmakers) want to push this off on the governor. The Legislature is the one that added it."

What a gutsy cowardly thing to say and do, Webster is real work of art:


The grant would have given a group $225,000 in federal money and $275,000 in state money…Walker used his vast partial veto powers to rewrite the measure so that only state money was used for the grant. That meant that state taxpayers were going to have to pay for the entire grant. Walker's veto also locked in place the likelihood the money would go to United Sportsmen, a group that has promoted the governor's agenda and endorsed him during his 2012 recall campaign.

Sen. Rob Cowles (R-Allouez) expressed outrage that his fellow lawmakers and Walker didn't halt the budget measure … Suder, who has since left the Legislature for a job with the state Public Service Commission, has not returned repeated calls from the Journal Sentinel this week.