This short film was so well crafted by the director, that I'm a little knocked out by how great this was. The noir look may be hard to transfer over to TV, if she does get her own show, but at least this film will live on for a long time.


You see, the thing you need to know about Peggy Carter is that she doesn’t take any 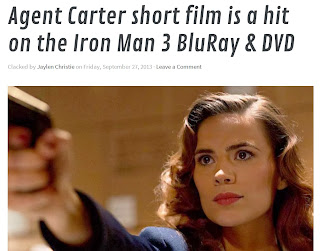 crap. Period. Fans, including myself, were left hanging at the end of Captain America: The First Avenger when the star-spangled superhero found himself in modern-day New York City after having been frozen and leaving Peggy behind in the 1940’s. I was always curious about what became of Peggy. Did she move on? Was she depressed? Was she exposed to gamma radiation?

Well, it turns out that Peggy is still an agent – and a damn good one at that. Agent Carter picks up a year after the events of Captain America … The film also boasts a nice cameo by Dominic Cooper as Howard Stark who offers Peggy an interesting business related proposition at the end. Leave it to Marvel to cross promote their characters and superhero groups. It also doesn't hurt that she’s portrayed by the talented Hayley Atwell, an actress accomplished in film, television and theater.