Wouldn't you know it, our poor picked on Republicans can’t even take the heat from a few kids expressing themselves at the expense of our governor. It appears the kids got into it. Art Teacher Kati Walsh wrote this opening statement on her blog:


It’s no secret that Madison is a pretty political place. Today, students were engaged in our Garden Signs project when an interesting conversation happened. One student said something to the effect of ‘Scott Walker wants to close all the public schools.” I have no idea where this came from, I missed the beginning of their exchange. Another student, who’s father is a reporter, proceeded to correct the student with a surprisingly very factual and grown up answer. This began a whole conversation between kindergartners, first graders and second graders about our Wisconsin Governor, Scott Walker.


A Madison teacher posted pictures on her personal blog of anti-Walker art work from her grade school students. According to teacher Kati Walsh's blog, the children's pictures involving Governor Walker emerged from one student's expression of an opinion of Walker.

The children ranged in age from five to seven.

Walsh says in her blog that when she realized the nature of the pictures was becoming inappropriate, she stopped and discussed with students what political cartoons were.


I love that. First grade kids drawing “inappropriate” pictures of our governor? Beautiful.

It also led to a discussion, she writes, on how people can disagree with one another without wishing harm on them.

Gee, I wonder how the thought police at the right wing think tank MacIver Institute would try to intimidate and insert themselves into our public school rooms with unprofessional advice about teaching?

And don’t forget to get out the Walker Recall Blacklist: 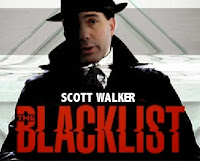 Spokesperson Nick Novak of the conservative think-tank MacIver Institute says Walsh signed the recall petition against Walker, and has been a public opponent of Walker administration policies. Novak calls the class art work inappropriate, and says instruction for school children of that age should focus on core subjects.

Because he knows how to teach, right? Nick Novak’s not so subtle message; “We’re watching you.” And why is an opponent of Walker still working?

"They have very strong feelings about Scott Walker," Walsh wrote in her blog. "It was...important to understand the role art plays in sharing one's opinion."