ALEC is not only the heart and soul of the Republican Party, keeping them alive for its own quest for power, it is now claiming god like status: It’s above the law.

were stamped with a disclaimer claiming they were exempt and because they were distributed through Internet file sharing sites called “drop boxes.”

Open records advocates insist that whether a record is on paper or in some electronic form doesn’t make it less open to the public, and that ALEC can’t exempt itself from the law.

Knowing ALEC legislation is used and passed by Republican lawmakers, it's mind boggling to think our government is being shaped by an "exempt" shadow government.

Add to that this down-the-rabbit-hole concept by state AG, J.B. Van Hollen in defending against a lawsuit to turn over ALEC legislative documentation:

WSJ: Van Hollen said Tuesday that he believes in the open records law, but that doesn't mean legislators can be forced into court to make them comply with the statute. 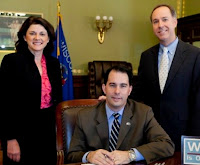 Van Hollen’s state Department of Justice filed a motion in Dane County Circuit Court last week claiming that state Sen. Leah Vukmir, R-Wauwatosa, is immune from lawsuits — including a pending open records suit — while she is in office.

Any perceived impartiality just went out the window with that statement.

The state constitution says lawmakers aren't subject to lawsuits “during the session of the Legislature.” The advocates say that means just during a “floor session” when lawmakers are debating and voting. “It’s hard to believe that the legislative intent (of the constitutional provision) was to say the Legislature should never be subject to civil litigation,” said Bill Lueders, president of the Wisconsin Freedom of Information Council.


“The framers of the Constitution inserted this provision — common among state constitutions — to give temporary protection to lawmakers from civil suits while they are doing the people’s work,” Van Hollen said in a statement. “Whether the framers’ decision to provide this unique protection to legislators was a proper balancing of interests is a debatable question. What is not debatable is my responsibility to defend its application when it is invoked.”

Sen. Vukmir scurried away like your typical Republican rat for cover, completely unable to defend her own actions. Perhaps her constituents can ask her what she’s trying to hide. Could it be an ALEC agenda that’s not quite in sync with the priorities of Wisconsin voters?
Posted by John Peterson, Democurmudgeon at 9/18/2013 11:02:00 AM

Labels: ALEC
Email ThisBlogThis!Share to TwitterShare to FacebookShare to Pinterest