WMC President and CEO sets bad example for other businesses by getting facts wrong in press release disguised as a news story.

The big lie from the big business lobby WMC, and their sky-is-falling CEO who doesn't understand numbers yet: 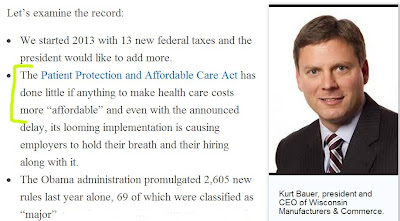 In reality (California and New York) and based on actual numbers you would think a business lobbying group would use if it wanted to be taken seriously, exposes the lies spilling from the president of WMC. And he probably believes his own BS. Talk about embarrassing.

From a HHS report released on July 18, looking at the marketplace rates so far compared with CBO estimates:

That would be a lot lower than CBO estimates (so it's working), and a little more than a bare bones junk policy that covered nothing, with huge out-of-pocket deductibles.  For a complete recent breakdown, I highly recommend Jonathan Cohn's report here.

WMC Pres. and CEO Kurt Bauer goes on to lament the elimination of toxic pollutants in Wisconsin and the harm to the state because Republicans refused to move on from dirty coal fired plants to cleaner technologies (it's all their fault). All the while still pushing nuclear, just after a plant closed due to the lack of buyer and consumer interest. Oh, China is polluting, so why can't we? And they put this guy in charge?

Note: I had a number of high deductible Health Savings Accounts, one with a deductible of $10,000 out-of-pocket believe it or not. They would raise it mid-policy and tell me in a letter.

Another little known nightmare involves drug riders, that cost between $400 and $800 a year, whether you use a prescription or not. You can't opt out either. If you decide to remove the rider, it's gone for good. They won't put it back on. Now that's what I call health care freedom.