Have radicalized right wing zealots taken over? Is this our present day Republican Party? From all indications in Wisconsin, yes, without a doubt.

The numbers now bear this out. And please, both sides aren't to blame. This is more one sided than anyone cares to admit, despite the fact that it’s been so obvious for so long. 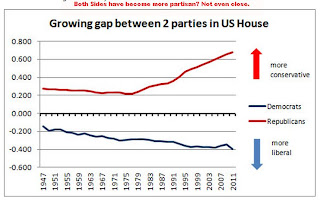 “The most striking feature of the contemporary Congress is extreme partisan polarization, which has reached a level not seen in well over a century,” says Thomas Mann of the Brookings Institution, co-author of the report with Norman Ornstein of the American Enterprise Institute.

The two congressional scholars started compiling “VitalStatistics” a few decades ago and just released their latest data tracking the shifting demographic makeup of Congress, the voting behavior of its members, voting patterns in congressional elections and other subjects.

Since the 1980s, Republican lawmakers have moved further to the right than Democrats have to the left. That finding is based on the widely cited research of political scientists Keith Poole and Howard Rosenthal, who developed a statistical model that charts roll call voting on a left-to-right scale. There were “split districts” in Wisconsin during every presidential election during the 70s, 80s and 90s.

There were no such districts last year. The five congressional districts that voted Republican for US House each voted Republican for president. The three districts that voted Democratic for US House each voted Democratic for President. This pattern is consistent with 2012 Wisconsin exit polls showing ticket-splitting for statewide office falling to new lows compared to the previous few decades. A modern-day first.

The 2012 election was the first time since at least the 1940s in which the party that received fewer House votes nationally (the GOP) won a majority of House seats, the report shows. Republicans received just under half of the two-party vote for all House races combined last fall. But they won almost 54% of House seats.