Superior just wants to pay for the cost of picking up garbage...that's all. Not so fast say Republicans.

It's hard to imagine what they were thinking when state Republicans tied the hands of local governments to balance their books. But here we are, and Democratic and Republican areas are now left to ratchet down their own standard of living and quality of life for purely ideological reasons. 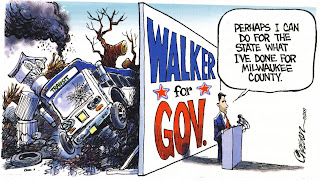 Scott Walker did this in Milwaukee, and no one cared to mention it in the campaigns. I've posted this cartoon for years, because it was that obvious at the time, and ripe for parody.

What's is happening now in the city of Superior is happening all over the state, all the while the cost of living continues to rise. The only choice now is to lower our quality of life in Wisconsin. You can thank the voters for telling us they didn't believe in recall elections, by keeping Walker behind the wheel of the GOP bulldozer that's about to plow down everything we've built up, and at a higher cost to taxpayers:


Duluth News: Wisconsin’s state budget is a game changer for the city of Superior’s plans to charge residents for garbage service.

It has left the city administration without a solution to recommend for solving financial problems at the landfill after a series of public meetings to discuss a proposal to institute a $20 per month household fee to replace an annual transfer from the city’s general fund.

The budget signed by Gov. Scott Walker on June 30 prohibits the city from raising fees without cutting its annual tax levy by the same amount.

Mayor Bruce Hagen said. “We don’t have a recommendation at this point.” That leaves the council with two options based on Larsen’s analysis: Do nothing and let the landfill deficit increase, or privatize the city landfill and garbage service at a greater potential cost for residents.