Reince Priebus redefines "tolerance" for gay Marriage, so it means...?

State embarrassment and chairman of the RNC was asked about a USA Today headline where he urged tolerance for gay marriage.

Oh boy, Reince Priebus better be very careful how he phrases his answer… 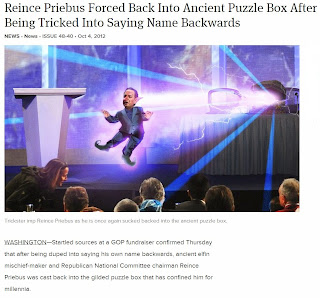 Uhhhh, he didn't just say that did he? I’m sure he’s going to catch himself and claw that back before…

"I don't really care for that word myself. I don't have a problem with it, I just think it has another meaning politically that can go the other direction."

"When I use a word it means just what I choose it to mean — neither more nor less."