In an almost embarrassing list of cliches that seem beneath the office, Scott Walker's cheap campaign attempts to character assassination possible Democratic candidate Mary Burke, says more about his temperament and ethical failings than anything his opponent could say.

For a party that still exists only to serve millionaire donors, attacking a millionaire Democrats is just...jaw dropping: 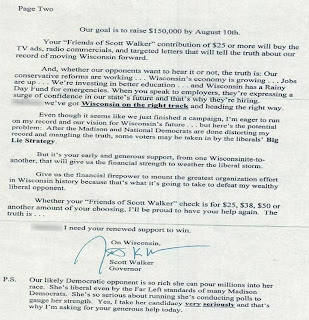 WKOW: In a letter dated and signed by Gov. Walker on July 18 and sent out to donors last week,  is already fundraising based on that prospect. "she's as liberal as you would expect a Madison Democrat to be." The letter goes on to say (about Madison millionaire Mary Burke) that "she's so rich she could pour millions into her own race" and "she's so out-of-sync she'll return to the Governor Doyle policies she embraced as his Commerce Secretary."

The letter goes on to make a fundraising appeal by stating: "I hope I can rely on your renewed strong support today because this ultra-wealthy, uber-liberal opponent will have enthusiastic financial backing from the Big Government Union Bosses, Emily's List and out-of-state radical extremists from coast-to-coast.  Please write your check for $25 today.