The way I see it, the constant drumbeat of the Republican Party’s now overused public assurance that they’re “protecting taxpayer money” means they’re covering up ineffective policy with a meaningless standby cliché.

We know this administrations borrowing is way up for transportation, taxpayer money is disappearing into the WEDC black hole and unemployment fund, and tax cuts too numerous to mention haven’t been paid for, so the only thing left is to repeat over and over?; “we’re protecting taxpayer money, ignore what we've really done.”

Of course I've got an example, and the reason I’m posting this alert. Check out the ridiculously obvious first two sentences of Alberta Darling's comments in the following press release: 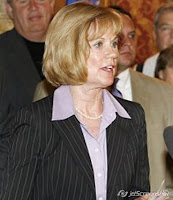 
"I applaud Governor Walker for signing this important protection for taxpayers. Our job as lawmakers is to be good stewards of the taxpayer's hard-earned money…”

That’s all that matters. I know Sen. Darling's statement would have had my conservative friend at the first mention of “protection.” That’s as deep into this story as he’d probably go.

Her second paragraph starts with and repeats the theme:

“Fraud hurts taxpayers and the people who rely on these benefits.”

There's an insecurity here that should be pointed out.