Give WKOW's Greg Neumann credit, that guy is everywhere. Take a look at his play-by-play Tweet + picture about Sly's protest against David Blaska's tea party singalong at the Capitol today: 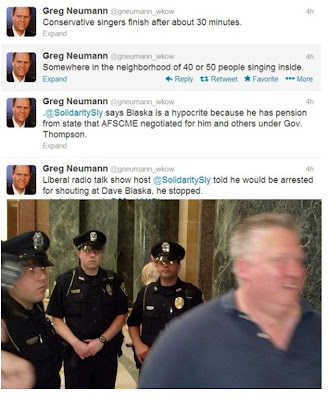 For fun, here's the conservative fringe group MacIver Institute's coverage, which is nicely put together considering the time they had, and heck, it's pretty good. Sly and all. Blaska's 3 dozen to Solidarity's 200...thugs:

If you have a chance, check out the great story at Jake's Economic TA Funhouse on the other options open to the Solidarity Singers, and Blaska's tasteless Twinkies statement.

Depending on how much time you have, Neumann interviewed right wing loon David Blaska about his singing protest at the Capitol today. Rep. Melissa Sargent took this guy on as well, and verbally knocked him to the floor. When you get Republicans to focus, and press them for an answer, they fold like a house of cards.

I've edited each guest up, and included the whole shebang, depending on who you want to listen to most.

Blaska first: With gems like, "Why does David Blaska have to get a permit and they don't ... No ones ever said the Capitol is the property of the Solidarity Singers ... They're their own worst advertisement. the intransigence, the self entitlement, the public tantrum they're displaying...they're turning off the people of Wisconsin."  All crackpot comments that prove how easily these guys fall in line with their "leaders." If you've ever wondered how despots take power with the peoples approval, watch David Blaska:

Here's how Rep. Melissa Sargent argued for the protests, a lesson for Democrats everywhere on how not to back down and get to the point:

Or the whole interview by Greg Neumann: