My head is spinning.

I just blogged how Republicans bestowed an amazing budgetary gift to the wireless industry by killing local control over where towers can be located, a move that could also destroy a cities possible revenue stream from cell tower fees, not to mention put unsightly structures anyplace they want.
Oh, and the wireless industry is a big donor to the Republican Party.

Juxtapose that with those unsightly roundabouts, with no lobbyists? That’s a whole different story. Now we want a state law giving local control over their possible locations: 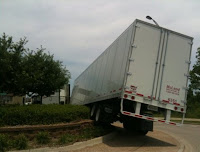 State Representative Garey Bies (R-Sister Bay) signed on to legislation this week that would give village, town and city governments the final say on whether the state can build a highway roundabout in their municipality.

Bies said, “…I think local folks should have a direct say as to whether or not they want these in their communities.”

Rep. Bies appeared on a local radio show … most calls was the proposed roundabouts … “But what I’m hearing from constituents is they want to be part of the conversation. This legislation will give them an opportunity to express their thoughts to their local governments.”

Amazing what a little constituent heat can do. Too bad the secretly passed cell tower law didn't get that kind of public airing, huh?