What can you say about our 1% warrior Paul Ryan? 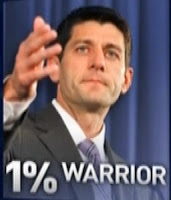 Ryan: “The president claims his economic agenda is for the middle class. But it's actually for the well-connected.”

He’s always looking out for the hardest hit, the downtrodden, the poor and the hungry, especially after he and his Republican friends caused the Great Recession. Who else would come to their aid by showing them they don’t need food stamps, unemployment or health care security.

Ryan: “Obama said he's interested in tax reform for corporations -- but not for families or small businesses.”

Sorry to interrupt, but Ryan wants the poor to pay taxes while providing tax reform for corporations. I won’t do it again…let’s continue:

Ryan: “He wants to give some businesses relief from ObamaCare. But he refuses to give the same relief to families.”

I've got to interrupt, but Obamacare is relief for families, and businesses successfully dragged their feet whining and complaining. Sorry…there’s more:

Ryan: “He wants to funnel money to his green-energy cronies. But he refuses to let us develop our energy resources and create good-paying jobs.”

Hold on, Obama wants to give subsidies to green-energy like congress did to those big oil cronies, because wind and solar is where the good-paying jobs of the future are. Okay, no more interruptions:

Ryan: “Today we have record poverty and high unemployment. For too many families, the American Dream is out of reach.”

I’m sorry, but we weren't saying anything like that in 2000 when we had surpluses, you know, just before Bush and the Republicans took over and spent like drunken sailors…including you Paul. Thanks for leaving that for us.