Imagine if you will, a CEO declaring it wasn't his fault he got a raise. You’ll laugh, you'll cry…


This just actually happened, thanks to another swell choice made by Scott Walker. It’s like saying, “I know I don’t deserve it, but the next guy might be worthy.” 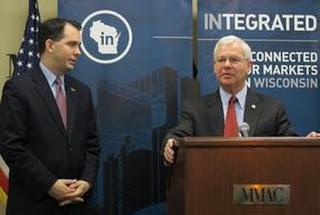 Biz Journal: Wisconsin Economic Development Corp. CEO Reed Hall said he did not seek a 50 percent pay raise, but said he views it as a reasonable amount for when the agency recruits for his ultimate replacement. “The thinking process by the committee was to recruit a person after me, we need that range.” Hall has no immediate plans to retire.

You can’t make this stuff up. This is how Republicans govern. Irresponsibly! I just love the following comment by Hall:

Hall was set to make $120,000 when he took the full-time position in January and in February received a $65,000 raise, “To be honest, I would’ve been comfortable with the original salary,” Hall said. “When I came into this job, it was for public service — not necessarily for salary,” Hall said.