New York Health Care Rates Cut in Half through Obamacare.

When I saw this chart I thought, holy cow, those are still high rates. But after digging a little at Wonkblog, I found out why New York has such high rates; insurers must cover everyone regardless of their health, preexisting conditions and all. Here's the chart listing the two highest premium coverage classifications in the Affordable Care Act. 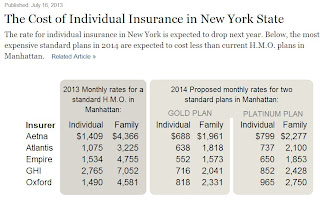 …And here’s why health insurance premiums are tumbling in New York. “ New York has, for two decades now, had the highest individual market premiums in the country. A lot of it seems to trace back to a law passed in 1993, which required insurance plans to accept all applicants, regardless of how sick or healthy they were. That law did not, however, require everyone to sign up, as the Affordable Care Act does. New York has, for 20 years now, been a long-running experiment in what happens to universal coverage without an individual mandate… The result: a small insurance market with very high insurance premiums.” Sarah Kliff in The Washington Post.

I found a chart showing the other lower categories in the Marketplace: 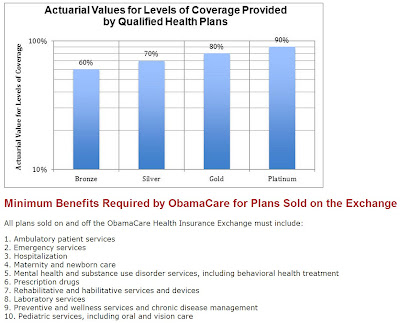 Currently the average American pays about 20% of their income for health insurance. Based off of what we know so far, the exchanges' "Bronze plans" and "Silver plans" are capped at 9.5% of your income for 300 - 400% FLP. It's a sliding scale so those under will pay less. "Gold plans" and "Platinum plans" can cost no more than 12% of income. Although high end plans may be subject to a 40% excise tax depending on cost. Depending on your income you may pay only a percentage of the total cost.

One thing to know upfront about the slightly higher rates:


Preexisting conditions: Obamacare absorbs the high risk pools often paid for by taxpayers, so the costs are now spread out, putting the risk back in the hands of insurers. For some reason, Republicans were successful getting taxpayers to cover all the high risk patients, while giving insurers the profitable healthy clients. Either through state high risk pools or higher monthly premiums for families, insurers avoided all the risks.

One final note. Knowing how brutal Republicans have been to Social Security and Medicare since their inception, I can understand how horrified they must be over being an eye witness to the roll out of Obamacare. That doesn't begin to explain their own creation and support of Medicare Part D, but no one has ever accused Republicans of being smart or consistent. So.....


MILBANK: On Obamacare, Republicans test the definition of insanity. “Well, this is embarrassing. Republicans have made so many attempts to repeal “Obamacare” that the scorekeepers have lost count…All the tallies fall well short of the actual number of times Congress has voted to repeal all or part of Obamacare. It has done that — are you sitting down? — 67 times.” Dana Milbank in The Washington Post.