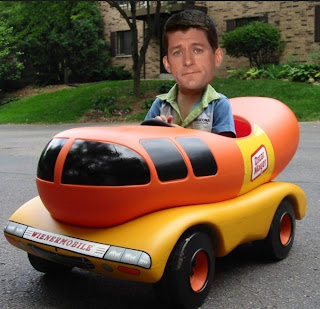 "In early August, when Romney tapped him, Ryan's life got predictably insane: he coined a new phrase, 'to get Weinermobiled.' It referred to a summer he once spent working for Oscar Mayer in northern Minnesota. A reporter asked him if he ever drove the Weinermobile. 'I did actually, as a promotion for turkey bacon at a grocery store,' he said. 'Then Wikipedia or something wrote that I was the guy who drove the Weinermobile.' That was its own job. Ryan only drove it once. But the story spread and he gets accused of lying. 'So now, whenever something like that happens, we say, "Oh, I'm getting Weinermobiled again." ' "