Let's face it, the governor didn't made it any easier for a Democratic challenger to easily explain Scott Walker's Rubik's Cube solution to health care coverage in the state. Campaign ads are a lot shorter than the two hours it would take just to explain why it's so unexplainable.

Making wild promises to coverage over 200,000 Wisconsinites, like he continues to say about his pie-in-the-sky job creation numbers, plays off the voters hope that he can't be that wrong.

But he is, according to the latest analysis, and he knows it. Walker is driven by shear politics; "I'd like to have fewer people in the state who are dependent on government." That's not a solution, that's a mindless Republican talking point. Sheboygan Press: 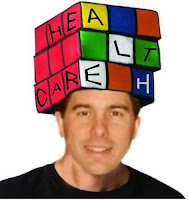 Bob Laszewski, a Washington-based insurance industry consultant, told The Associated Press after reviewing the Republican governor’s plan … to move more people off state Medicaid plans and onto private insurance through a federal marketplace won’t result in cutting the number of uninsured Wisconsin residents in half as promised. Walker’s numbers are inflated because poor people near the poverty line won’t be able to afford private health insurance that requires individuals to pay for annual deductibles and other cost-sharing expenses.

“To me this is crazy policy,” said Laszewski, president of Health Policy and Strategy Associates and a frequent critic of President Barack Obama’s health care overhaul. “These exchange plans were never designed for Medicaid-eligible people. They’re designed for middle-class people who can afford deductibles and co-pays,” he said.

People losing Medicaid under Walker’s plan would simply go without insurance, foisting more costs onto hospitals that will still have to treat them.

Again, Walker’s purely ideological point is, “I’d like to have fewer people in the state who are dependent on government.” 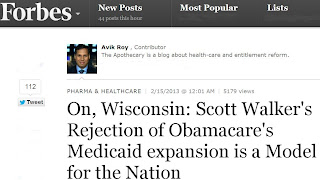 Walker refused to have Wisconsin establish its own exchange … Yet the success of Walker’s plan hinges on people accessing health insurance through the exchange. Laszewski said Walker’s plan is convoluted … when you get into the pieces it doesn’t seem to make a lot of sense.”