Justice Prosser a Danger to fellow Justice Bradley, who needed security and locked her door at night.

Just how bad do we need to throw out the conservative bullies on the Wisconsin Supreme Court?

Well, if you have to lock your door after hours to protect yourself from an aging partisan misogynist,  we're long long over due.


I wonder what the conservative radio jackals will say about this lurking and sinister Justice? They won’t, or they'll blame "liberals," whatever that means. 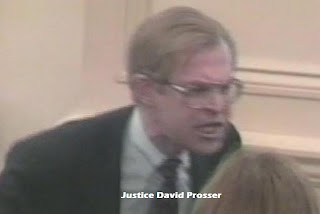 jsonline: State Supreme Court Justice Ann Walsh Bradley received stepped-up security from law enforcement more than two months before Justice David Prosser put his hands around her neck in a dispute over a controversial case, according to a court document issued Wednesday.

That disclosure came in a decision Bradley released recusing herself from the ethics case against Prosser over the June 2011 altercation. Bradley wrote in the filing that she and Chief Justice Shirley Abrahamson to this day lock themselves in their offices when working after hours because of concerns about Prosser's behavior. "If nothing is done, I wonder what will happen next in this escalating pattern of abusive behavior," Bradley wrote.