Walker Killing State Jobs: Weakest job creation since the Recession!!! Is that possible?

It’s not that the Journal Sentinel isn't showing voters just how bad Scott Walker’s job creation ideas are for the state.

The problem is, other media sources and editorial boards don’t seem to think it’s a big deal. And god forbid conservative radio talk hosts bring up the subject. It proves once again they’re not concerned with successful policy ideas, just power and control of our state government.

How bad do you have to fail before something is done? 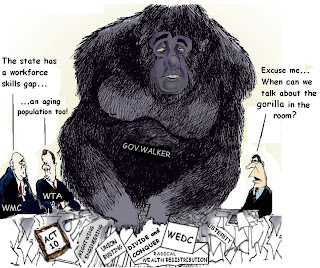 And Democrats, how long will it be before you hit the media trail with a consistent message of outrage over Walker’s one biggest failure. They’re missing in action again and learned nothing from the Wisconsin 14. Democrats are again a party on defense, whining about the Republican agenda instead of advancing their own. I hate this party.

And I hate what Walker’s Wisconsin has become. This isn’t just Walker’s failure, it’s the parties ideological failure, and that’s what scares them:

Job creation in Wisconsin slowed markedly between July and September, according to the most recent available government data deemed credible by economists. According to a report Friday from the state Department of Workforce Development, the state added 20,481 private-sector jobs in the 12-months that ended September - with most of the weakness in the final three months of that period. That 12-month increase is a little more than half of the average gain of 37,355 for the preceding seven quarterly reports.

Remember, Walker is the darling of the Republican Party right now and a presidential hopeful. Why his record isn't dragging him down can be laid at the feet of our elected Democratic politicians who can't drive the point home, and the compliant statewide media.

The final nail in the coffin, and a line that should be memorized by every Democratic official:

Friday's report also contained the weakest reading since the 12 months of September 2009 to September 2010 - a period that overlapped with the last recession.

Seriously, can it get any worse than that?