I wonder how Steven Spielberg feels about that, since he’s a creative consultant for Universal. Or the Blue Man Group.

This can’t be okay. Boycott.

Fox News: Universal Orlando Resort plans to drop medical coverage for part-time workers starting in 2014, due to a provision in the federal health care overhaul.

Universal spokesman Tom Schroder stressed that the decision affects a relatively small portion of employees. "We care about our team members and we want them to have the best, most-affordable medical benefits we can provide," he said in a statement. "This particular issue affects about 3 percent of our 17,000 team members, and we're going to continue to work toward a solution."

Universal is quite the "team" player. They just want their "team members" to have the "most affordable medical benefits." "Affordable," sounds a bit miserly by this big corporate player. 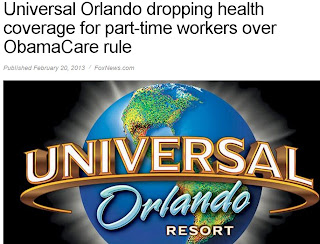 The current plan for part-time workers costs just $18 a week, but caps hospital coverage at $5,000 annually. The trade-off in these plans has historically been that while payouts were capped, premiums were low. With the limits being phased out, companies like Universal Orlando can no longer keep those policies. Some employees reportedly are blaming the company, claiming Universal could offer better coverage that complies with the law if it wanted.

For one thing, part-time workers would probably qualify for the state’s Medicaid program, and not Obamacare, so Universal Orlando is attempting to soak Florida taxpayers for their employee health care. Why that doesn't make conservatives angry at business, is anybody’s guess.

Perhaps it's this idea that making money is the bottom line now, a get-out-of-jail card for devaluing the human life for profits, and kicking Americans to the side of the road like social lepers.

This is a symptom of our private sector insurance industry, the middle man, exerting pressure. Hmm, and we’re supposed to feel sorry for them when we talk about single payer?

Last year, Florida's Ave Maria University announced it was dropping its student health insurance plan in large part over concerns about the coverage cap. University officials were concerned that if their policies came into compliance with federal law, they would be looking at a premium increase of roughly 66 percent, and an increase in deductibles.

I say anytime an insurers threatens to jack premiums up, take a walk, especially by larger companies like Universal.
Posted by John Peterson, Democurmudgeon at 2/21/2013 09:50:00 AM