The unemployment insurance program has been around a long time, and along the way, it has been fine tuned to protect employees and employers alike.

But Scott Walker has decided it would be more fun to kick the recently unemployed while their down-and-out. Imagine how many businesses would love to pile on?

Well few did just that and more at a Friday session about unemployment insurance in Chippewa Falls. Try to make any sense of this one horrible employers reasoning:


Julie Court said her employee at Chippewa Falls Chiropractic tried hard, but wasn’t able to do the work. But after getting complaints about the woman’s work, Court fired the employee at the end of a job probation period. The former worker then applied for, and received, unemployment, a benefit employers pay through unemployment insurance.

“The unemployment insurance person told me over the phone that it’s not the fault of the employee that she cannot do the job,” Court told local lawmakers. “That’s zero rights as an employer when someone cannot do her job,” Court said.

Don’t play dumb: “Zero rights?” Court had the right to pick the right person in the first place. Not being good at a job is not a reason to deny unemployment, especially when you have a willing worker.

What Court is doing is blaming the worker for her bad decision. She's so bad a business woman that she even said this:


“I’m not hiring again when I have no rights,” Court said.

Really, even when she needs to hire someone? Bullshit; she wants to get off scot-free by working people and then firing them without any liability. But that’s why we have employment laws now, and did away with slavery.

But it’s even worse when someone in charge of a job center hates helping the jobless, and resents them for some imagined sense of "entitlement:" 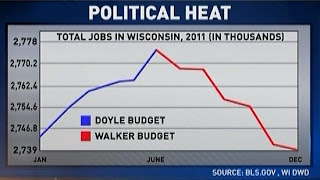 Dan Lytle, coordinator for the Eau Claire County Job Center called a state requirement that job seekers have to do two jobs searches a week to continue receiving unemployment as ridiculous, saying that figure was too low. “There needs to be significant changes to kind of put a fire underneath their pants,” Lytle said of the job seekers. “There is a huge false sense of entitlement for people who are collecting the (unemployment) benefit,” he said.

Do they feel entitled because they worked for it? My god.

If you've ever been on unemployment, then you know what I’m talking about. Try applying 4 times a week for 3 or 4 months in a row, for jobs that aren't in your field of expertise, and pay a lot less than you’re getting in benefits.

What you're seeing is the next step, after business takes control of government, where they begin wiping out safety nets and benefits. Gee, are we there already?
Posted by John Peterson, Democurmudgeon at 2/11/2013 01:59:00 PM